Microgreens for the masses: A quick and easy guide for how to grow your own (The Sacramento Bee) 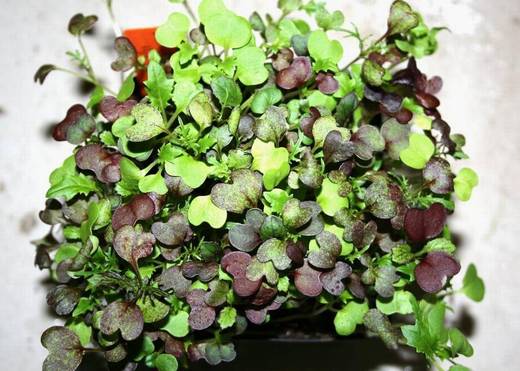 They’re the fastest crops you’ll ever grow. And anyone can grow them – even without traditional garden space. That’s the beauty of microgreens.

Valued for their look as well as taste, microgreens have become the darling of creative chefs and devoted foodies. Beloved by millennials, these ultra-mini veggies (and herbs and even flowers) satisfy cravings for intense flavor while also offering needed nutrients (albeit in itty-bitty portions).

Microgreens also have become an easy introduction to food gardening for all ages. That helps explain a giant jump in interest among new gardeners under age 34. According to the 2016 National Gardening Survey conducted by the Harris Poll, an estimated 6 million Americans started gardening last year; of those, 5 million were millennials. Other research found that one out of three millenials grows edible plants indoors, mostly herbs and microgreens in a sunny window or under lights.

Because they’re ready to harvest in days or weeks instead of months, microgreens have become popular classroom projects, too, as school children learn about growing plants.

What are microgreens? Just about any edible plant.

“Basically, they’re very young versions of typical herbs and greens,” explained David Sasuga, founder of Fresh Origins, which grows more micros than any farm in the nation. “Microgreens are young vegetables or herbs that are harvested when only 1 to 1 1/2 inches in height. That’s generally 7 to 10 days old at harvest.”

Other growers broaden that harvest period to 21 days and 2 inches tall, depending on the variety of vegetable.

Microgreens can be grown year round indoors, preferably on a sunny windowsill. In Sacramento, they can be grown outdoors April-November, but they prefer some shade (not full sun) and shelter from wind, which dries them out. Also, if grown outdoors, microgreens are more susceptible to pests.

Different from a sprout

“A sprouted seed with roots is just a sprout,” Sasuga said. “Sprouts are not grown; they’re just sprouts. They’re produced in warm, humid air and really wet conditions. With microgreens, the seed is actually planted and grown in soil or other medium (such as hydroponics). We grow ours under natural light and harvest when ready.”

Microgreens include a bit of stem plus cotyledons (or seed leaves) and the first two real leaves. To harvest, microgreen greens are snipped with scissors just above soil level. The root – even if it’s a root crop – is not part of the microgreen.

“You want to snip them when they’re just the right size,” he added. “The key is to get them harvested at the right stage and uniformly.”

Microgreens are younger and smaller than “baby” vegetables, which are harvested with more leaves and definition. Baby veggies look much more like mature vegetables, only little.

While they have very few leaves and may not yet resemble their parents, microgreens taste much like their full-grown counterparts; just milder. Fresh Origins’ best sellers are two flavorful herbs: basil and cilantro.

Pick a variety to grow

Some vegetables are easier to grow as microgreens than others, according to Johnny’s Selected Seeds, which includes several of those in its Mild Micro Mix. the company offers at least 79 varieties of micro green seed or mixes with detailed instructions and photos of what the “mature” micro variation should look like at harvest.

If creating your own mix, combine varieties by their germination time; either fast germinating (three or four days) or slow germinating (one week or more). Seed packaged for growing fully mature vegetables or herbs can be used for microgreens, too.

When growing your own, the various seed varieties can be mixed before planting, then grown (and harvested) together. They can be grown in soil or hydroponically.

Before planting, remember to pace your microgreen farming. To avoid a glut of greens ready for harvest at the same time, start small by planting enough seed for one 6-inch pot or tray. Then, plant more seeds in more pots in succession; once a week works well.

That will keep a fresh supply of microgreens ready for harvest. After snipping, recycle the soil outdoors and start fresh again.