Want your child to eat more greens? Let them grow them! BY our mom/CNP crush Sarah Bester 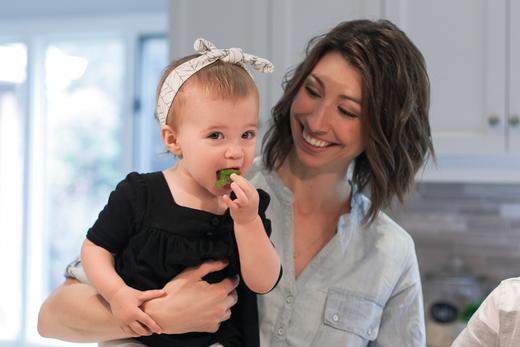 As health-conscious parents (and protective mama-bears), we’re all looking for ways for our kids to get more of the vitamins and nutrients they need to thrive. And the rumours are true – leafy greens (think romaine, spinach, kale, cilantro) are some of the most nutrient dense foods out there. They pack a ton of nutrients, with relatively few calories.

So with all that goodness, why is it that just the sight of something green and leafy is enough to make most kids go running for the hills? And how is it that they can they spot even the ittiest-bittiest fleck of green in their food a mile away?

Obviously we need to figure out some “creative” ways to make sure our kids are getting those leafy greens as possible, because they sure aren’t begging to eat them by the plateful.

And for the record, I don’t mean sneaking some spinach into their pasta sauce when they’re not looking. This may work in the short-term, but long-term it’s just going to make them dislike those greens even more.

If we want our kids to eat leafy greens on the regular in the future, once we can’t get away with hiding them in food anymore, we need to help them learn to really, truly like them. So that they will actually choose to eat them on their own.

So, whether your child is starting to dabble in the world of leafy and green, or won’t touch anything green with a 10-foot pole, I have a proven strategy for getting your child to eat more greens than they already are – by choice! Research conducted in the U.S. found that kids who were involved in the process of growing and cultivating leafy greens, were more likely to chow down on greens later on.

In the study, the percentage of kids choosing to add salad on the side of their main meal, went up by 8% when they were part of the project to grow the greens.

And getting a food on their plate willingly is an important step in getting them to actually try it. So this is huge!

I have a few thoughts on why this strategy works so well:

Putting healthy food on a child’s plate and expecting them to eat it = pressure. And the reality is, kids don’t respond well to pressure when it comes to trying new foods. In fact, pressure has the opposite effect that parents intend it to.

However, expose kids to leafy greens in their natural environment? That’s a different story –  they get excited to see them, feel them, smell them. And more importantly, they get to do it at their their own pace. They get familiar with the food, without anyone telling them they have to.

And once kids get comfortable and familiar with a food, the chances of them actually taking a taste are so much higher.

Kids have this natural curiosity when it comes to how the world works, don’t they? They’re always asking questions and are truly excited to learn where things come from.

And what’s cooler than the process of how the food we eat goes from a tiny seed to a large, edible plant?

The whole farm-to-table experience is pretty darn amazing. And when kids get to be involved in this process, the “coolness factor” of kale and other leafy greens increases quite a bit.

Which would you rather eat – bagged, wilted romaine that has been sitting on a store shelf for over a week or a fresh, crisp head of romaine that has just been harvested from the garden? Enough said!

So how can the results of this study be applied to real life?

Instead of trying to convince your kids that spinach will make them strong, simply get them out in the garden. Get their hands dirty. Get them involved in the miracle of watching food grow. It’s as simple as that. Join Sarah and her Raising Healthy Eaters Facebook Community for daily tips on how to raise healthy eaters instead of picky eaters, plus a supportive group moms that are right there in the mealtime trenches tools.